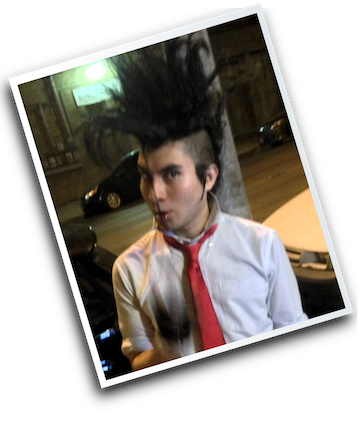 I've spent most of my adult life as a tech blogger and musician. This used to pay the bills, but web ad revenue has dropped considerably. That, and tax season always sucks when you're a freelancer. While I can admit, there's no such thing as 100 percent job security, I can say that freelancing is one of the most unstable jobs you will encounter. It wasn't unusual to go from having a healthy income for two years straight to instantly struggling when a website shut down. It wasn't a fun way to live.

Shortly after that, I found a newspaper job. It was okay, but it was never my thing. After being promoted to editor, I realized that I didn't want to cover local town news for the rest of my life. It was 60-hour workweeks and roughly $1,200 a month. While doable, it didn't feel like a healthy source of income. Besides, revenue was low, and I honestly have no interest in local politics. I was unhappy. My significant other was unhappy. It was time to find something else.

While working for the newspaper I went around looking for a new job that would be much more rewarding. I stumbled onto an entry-level computer technician job for a local municipality. They were looking for someone with minimal experience and it was only part-time. The pay was less, but I felt like I had more of a future in a new career path. I applied, never thinking I'd get the job. Still, it was worth a shot. Someone told me not to take it, because I'd be making less and now working part time. I followed my instinct and went against their well-meaning advice. I knew that if I was going to find a new career, it would have to be now. I had no idea what I'd be doing, and I didn't even know if I would like it. What if it was way too technical? What if I didn't know nearly as much about computers as I thought I did? I decided to take my chances. After all, I knew it was worse to sit around facing the what ifs for the rest of my life.

Sure, I felt lost at first. I was afraid to fail, but my fear of not trying has always been greater than my fear of failing. Turns out, I really liked it. I wanted to be better. I wanted to know more. I jumped at every opportunity to learn something new, even if I had no clue what I was doing or how to do it.

I was always interested in movies like Hackers and thought that experiencing networking from the security, or even the attacker's side could be a cool thing. I just didn't know it actually was a thing. It kind of started by accident at first. I picked up a NoStarch book on Python called Automate the Boring Stuff With Python, and started learning a bit of Python. Then I wanted to learn about TCP/IP, so I picked up a book on TCP/IP. I'd heard about Linux, but had never dived in. What did I do? I started reading around, and when my mom asked me what I wanted for Christmas, I asked for a Linux book. Little by little, I learned more.

Eventually, a new job opportunity came up. It was another job in IT, but this one was full-time and paid more per hour. The choice was easy. Even though I was going to miss my old crew, I knew that it was the smartest move to make. I applied, and they brought me on as a computer technician. I continued to learn everything I could about networks, switches, operating systems and scripting. I read books on information security and ethical hacking.

While working here, I took on every task I could and started to learn more. I did my best to learn my way around our Kaspersky server software and ADManager. On my off time, I learned more Linux and security concepts. This is around the time I felt that it was time to go back to school and get my degree. I shopped around for a while, and there were a few local options, but none of them offered anything that worked around my full-time work schedule. Luckily, someone. I didn't even catch her name, told me about her sister who was considering Western Governors University. She said it was an online school. Sometimes, online schools get a bit of a bad rap. While I'm sure it's justified in some cases, all that can be true with any college. Besides, I was willing to put my work in.

A few years later I got a job as as SOC analyst and used all my downtime on those 12-hour overnight shifts to keep learning: Hack the Box, certifications, whatever I could get my hands on. Somehow, I ended up graduating, and in another crazy turn of events, I got hired by an awesome company in San Antonio called Rackspace. Still learning a lot, and hope to continue learning more.

I'm not the most knowledgable person when it comes to security, but I'm always willing to learn and I do my best each day to be better than I was the day before. I make it a point to learn at least one new thing every day.